Letters from a son to his mother: William Moore (OC 879)

William Moore (OC 879) was born on 16 June 1892.1 He was the son of Dr A.P.B Moore of Ashley House, Albertbridge Road, Belfast.2 He was a prefect and represented the College in the Cricket XI for 1911 and Rugby 1st XV from 1909 to 1911.3 He served as a Second Lieutenant in the 9th Battalion, Royal Irish Fusiliers.4 His wartime letters have been deposited in the college archives and cover his time in uniform for three months, from June 1917 to his death in action on 16 August 1917, during the Battle of Langemark.5 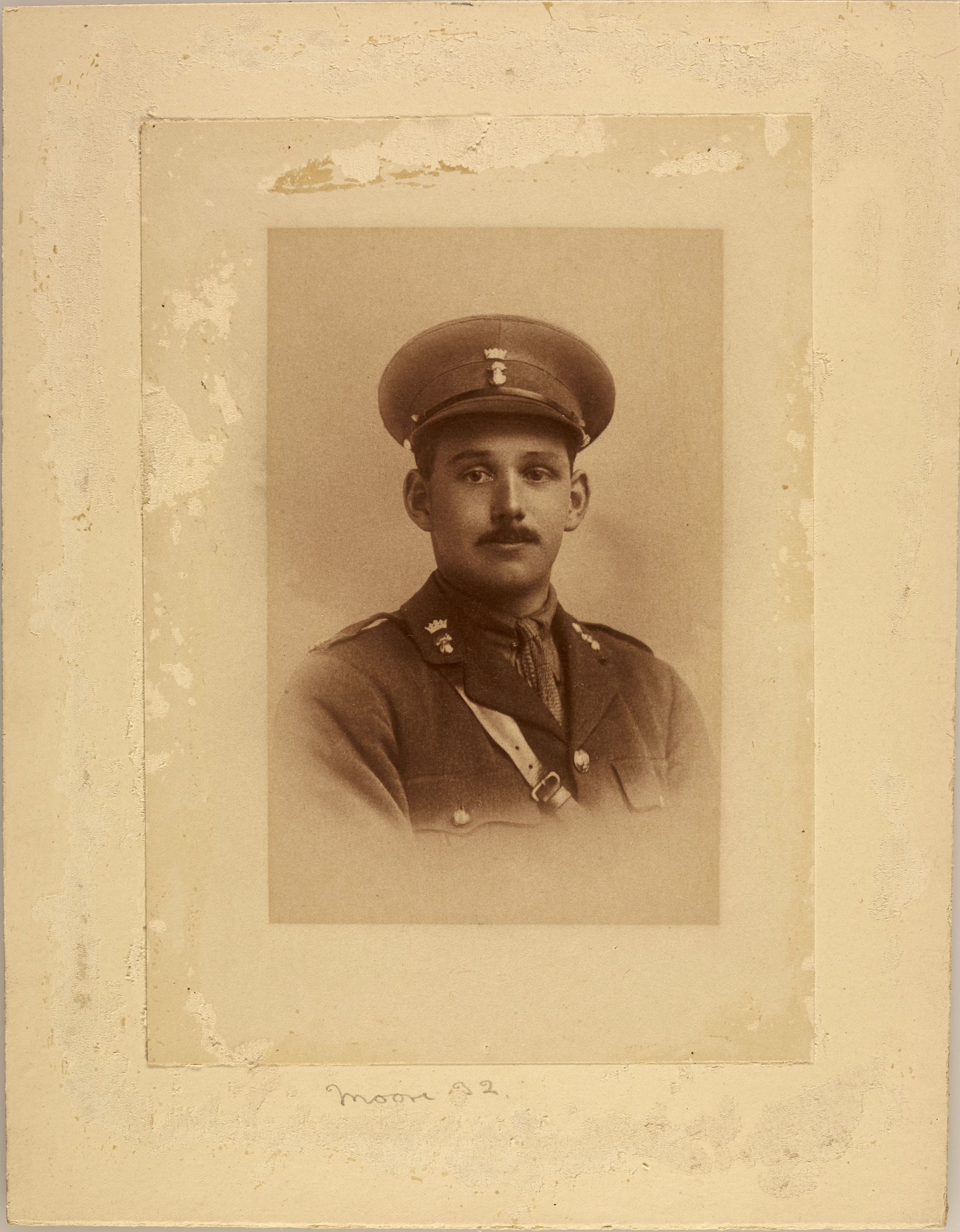 He wrote to his parents and wife Mary largely about the routine nature of trench warfare and military life in his Division, the 36th Ulster. He also commented on domestic and political events. For example, in his first letter (15 June 1917), he believed that the deployment of General Pershing and the American Expeditionary Force  ‘would induce the Germans to sue for peace.’6 He also noted how King George V changed the name of the British royal family from the German Saxe-Coburg and Gotha to the English Windsor, adding that it was a

‘pleasure that the King ha[d]…decided to root out all the Teutonic elements in the royal family.’7

William also responded to the growing political and constitutional developments in Ireland. On 10 July 1917, Éamon de Valera of Sinn Féin beat Patrick Lynch, the Irish Parliamentary Party Home Rule candidate, in the East Clare by-election caused by the death on active service of Willie Redmond, killed at the Battle of Messines. At the same time an Irish Convention had been convened to address the constitutional problems relating to an early enactment of self-government for Ireland following the Easter Rising. He wrote on 18 July 1917 that the situation in Ireland

‘appears to be critical, and it is not a good prelude to the Convention to have the Sinn Feiners rowing over recent pronounced successes. I hope the situation will not get out of hand and perhaps the more moderate elements of the two great constitutional parties may draw together in face of the menace.’8

He made several comparisons between the French countryside and that of Ulster. In one letter he said ‘it was a relief to get settled down in a fresh and open country-side. In fact, the country about here reminds me a great deal of the surroundings of Limavady, so it must be nice, as you can well imagine.’9

He also had confidence in the eventual outcome of the war but noted recent setbacks. In his penultimate letter on 12 August 1917, he wrote

‘with regard to the late advances, nearly everybody says it would have been an overwhelming success, if the terribly wet weather had not interfered with the progress of the operations. As it was, we did as well as could be expected and the Hun has again proved himself to be inferior to our men in every respect. As you probably know, the area of the British push was for a long time the most uncomfortable part of the line, so it behoves us to get rid of the Hun in this district, and we mean to do so.’

He added, ‘it would be nice to think that the war would be over before the winter sets in, but I am afraid that this will not be the case’.10 In his final letter, written to his father, he told his parent that ‘the Ulster Division will shortly be in action again, and that we all hope that there will be a successful upshot to our “little bit” of the attack’. He was killed two days later.11

After his death a relative, David Moore, wrote an acrostic poem12 to spell William Moore:

W eep not; for death to him was but the portal

I nto that larger life of peace and rest,

L ove lifts the veil and shows us life immortal, -

L ove that gave Life and All to bring His best.

I nto the fiery lake of grief and sorrow

A ll are immersed, baptized that they may be

M ore like the Man who faced the great to-morrow,

M oved with a calm and selfless dignity,

O 'er some this banner waves, “He died for others.”

O 'er some waves this, “He died that we might live.”

E ver rejoice in having such to give!