In the few months which followed the declaration of war in August 1914, Britain experienced a rage militaire, a passion for arms. When the Great War started, the United Kingdom did not have conscription and relied on voluntary enlistment to staff its armed forces. Lord Kitchener, Secretary of State for War, made a call for 100,000 additional men for the army and around half a million men enlisted in August and September alone.1 By December 1915, 2,466,719 men had volunteered for military service. However, by this time, it was clear that the supply of manpower to the armed forces was declining and conscription was introduced to press men into military service. However, for political reasons, those born in Ireland were exempt from this compulsion; their decisions to join up were entirely voluntary.

By the time of the Armistice, CCB had educated around 1,200 pupils who had reached the military age aged 18 since its creation in 1894, of which 594 served in the armed forces of British, dominion or allied armies.2 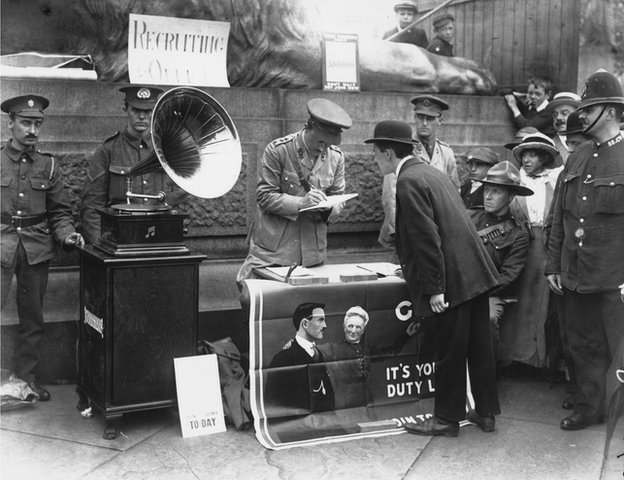 In the early days of the war, large numbers of Irishmen enlisted to fight in the British armed forces. Around 200,000 Irishmen served with British forces during the war with around 130,000 civilians volunteering during the conflict.3 The rates of recruitment varied across the four provinces of Ireland. In Ulster, the enlistment rate matched that of Britain itself. The rate in Leinster and Munster was about two-thirds of the British rate but Connaught lagged behind them all.4 Men volunteered from both Ireland’s community traditions in huge numbers. In the north of Ireland, the recruitment rate amongst Irish Catholics and Protestant loyalists was similar.5

The motivations for men to enlist were complex and often were shaped by community tradition and history. Many from Catholic or Irish backgrounds joined up to ‘save Catholic Belgian’ from German hegemony but also because John Redmond MP, leader of the Irish Parliamentary Party, said that service in the war by Irish Catholics would ensure the implementation of the Third Irish Home Act rule after the war.6 This legislation had received royal assent on 18 September 1914 but its enactment was suspended until the conclusion of hostilities.

Many men from Protestant loyalist backgrounds had a strong political and cultural identification with Britain as unionists. Other loyalists took a similar perspective to that of many Irish Catholics, believing that military service would demonstrate their loyalty to Britain and Empire and guarantee their exclusion of Ulster, or parts of Ulster, from the terms of the Third Irish Home Act after the war.7 However, many Irishmen from both communities had less political motives for enlistment; many joined up for economic reasons, because war offered adventure and because their friends had enlisted. 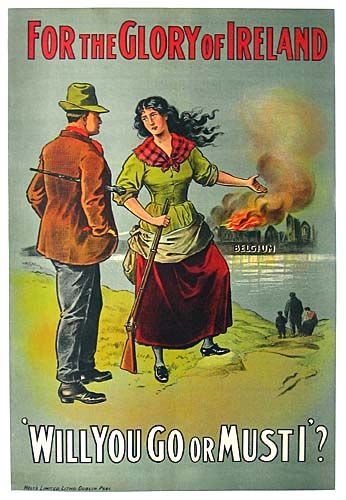 OC’s response: For King and Country

The response of Old Campbellians (OCs), former Campbell pupils, was swift and prompt. Many commemorated on the CCB Great War Memorial in Central Hall gave up their civilian careers to enlist.

John Sinclair (OC 182) was so desperate to ‘get out to the Front’ that he resigned his commission as he was deemed medically unfit to for active service so he enlisted as a private in the Argyll and Sutherland Highlanders.9

The motivations for enlisting, like those of many Irishmen, were varied. 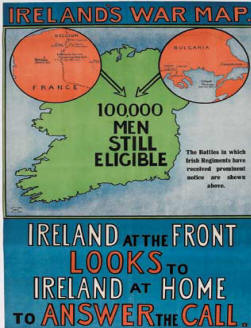 The Campbellian declared the struggle which Britain had entered in August 1914 as a ‘noble cause’. The headmaster and tutors firmly believed that the fight was just and honourable and that it was a citizen’s duty to fight for King and Country.

Robert McConnell (OC 938) and his brother Samuel McConnell (OC 937) both ‘ardently desired to do their ‘bit’’. Sam was ‘intensely disappointed’ to be declared medically unfit.10

The perspective taken by school staff and its official magazine was replicated by other institutions. Churches urged their parishioners to join up.

The Reverend John Davis (OC 49), then a minister of Buittle parish church in Scotland, gave patriotic sermons, encouraging all men of military age to contribute to the war effort. In December 1914, it was reported in the local paper:

"On Sunday evening the Rev…Davis, Buittle, conducted the evening service at Southwick. Despite the inclement weather the church was well filled. The service was an intercessory one. Preaching from Samuel, "All the people shouted 'God save the King' ", Mr Davis referring shortly to the occasion of Saul's choice as King turned to present day affairs. He made an eloquent appeal to all of military age and ability to consult their own conscience as to whether they were entitled to go to the front or do their share in staying at home. The able discourse was listened to with a rapt attention. The organist, Mr James Halliday, played the "Marseillaise", the congregation standing.”11

In Belfast at the Megain Memorial Church on the Newtownards Road, Reverend William Witherown preached that:

‘men from our Colleges and Universities…have joined the Colours to fight for liberty and civilisation and righteousness…to do all men could to put down all the despotism, oppression, cruelty, atrocity, falsehood, treachery and heathen frightfulness connected with Prussian militarism.’12

Other pressures influenced OCs to join up. Robert McConnell (OC 938) was influenced by parental expectation and his perception of manliness. Writing to his father, he said he joined up because it was ‘the only thing you would have me do. You would not like if your son was having an easy time while all the chaps in our church are on the battlefield. And when I come back I will not be a boy, but a man.’13 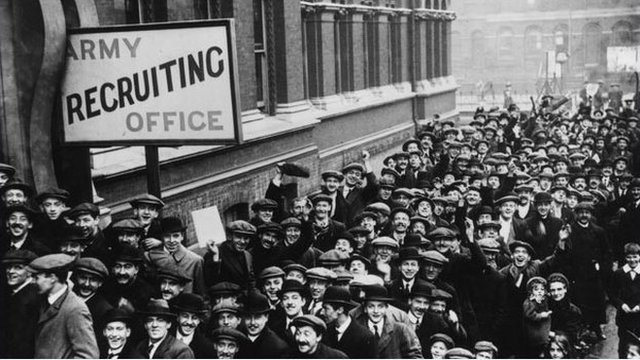 Standing out against the enthusiasm and support for the war was one OC. Eric Dodds (OC 1023) took a different view on the war enthusiasm and patriotism. He said:

‘I gazed sadly and uncomprehendingly. I was, for the time being at least immune to the infection. The notion of going out to kill or be killed by one of those young Germans in whose company [in July 1914 when he was with William Semple in Germany on holiday] I had so recently got cheerfully drunk was a prospect that filled me with repugnance...My practical conclusion was that this was not my war’.14